¡Hi! My name´s Carlos Gonzalez and I live in a small town close to Madrid, Navalcarnero.

I was borne in Madrid but it was more an accident than something expected as all my bloodline comes from Asturias (Northern Spain). Anyway, I enjoy the city where I was borne.

I was awarded a scholarship in 1963 to go to the USA to study and I graduated from Helix High School in La Mesa, California (Class of 1964).

I had the privilege of being in the right place at the right moment and I started to work for NASA in 1968, just before the launch of the first manned flight of a Saturn vehicle, Apollo VII.

From there on, I lived and participated in real time in all of the Apollo flights, Apollo-Soyuz, Skylab, Space Shuttle and all of the scientific vehicles to our solar system.

After 43 years, I´ve retired from MDSCC (Madrid Deep Space Communications Complex) in Robledo, near Madrid, while being Operations Manager and Deputy Director.

I am including a brief resumee at the end.

In my private life I enjoy the time I now have for doing the things I like.

I´m trying to learn to play piano and I wrote an essay about the Space Race and, particularly, about NASA´s Project Apollo and, also, about the possibilities of a manned trip to Mars in the very near future. You can take a look at them at My essay and give me, hopefully, comments and criticism to make them better. Just go to mu Visits book. Thanks.

1965 Attended a technical course on voice/data communications at the Telephone Co. Ended number 1 among 50 other participants.

1965  Working for Telefónica at Bujaraloz, Spain, on an 8 GHz radio link between Bujararaloz and Tudela and the coaxial link Madrid-Barcelona.

1968  Started job for NASA at the Fresnedillas MSFN (Manned Space Flight Network) Station in Madrid. Participated in the first manned flight of Project Apollo (Apollo VII) and all subsequent.

1971   Participated in the design, development, and implementation of a Network training course for Supervisors and Controllers at JPL (Jet Propulsion Laboratory in Pasadena, California)

1981 Received a NASA award in appreciation for my job as Operations Supervisor, while operating the OPS Console, in Madrid during the STS – 1 Mission.

1985  Coordinated the transfer of the Fresnedillas 26 m. Station to the Robledo Complex.

1997    Member of the group who designed, developed, and implemented, the 26 m. automation engine

2009   Promoted to Deputy Director for MDSCC.

My family is a fundamental foundation of my life and I can´t think about living without them.

I have a wife, Estrella, two daughters, Raquel and Sara (and their counterparts, Raúl and Fran), and a grandson, Hugo, all of  whom I am very proud of, and I believe that I am very fortunate to have so many wonderful persons in my close surroundings.

One of the best things about my family is that I can fully rely on them. I have very few, but very important, friends (REAL FRIENDS, with capital letters) and I consider them part of my family.

I love to share with my family the good things that happen in my life but I usually keep the worries and problems to myself. One thing I am totally sure of is that they will always be with me to help if the need be.

If you want to know my family better, there´s a few pictures at My family.

I´m not as active as I used to anymore but I am still interested in living my life having as much fun as possible and I´m involved in a variety of things that go from writing to giving talks to schools, etc.

E.G. I used to dance flamenco every day and now I seldom do (getting old I guess); also, I am interested in all kinds of musical instruments and I am able to get acceptable sounds from all that I have tried (more than 20), now I am learning to play piano but this one is the most difficult I have found so far. 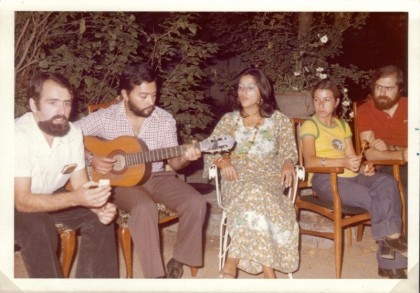 As you can see in the picture, my wife Estrella and I make a peculiar duo but we animate our friends and family parties. (Believe it or not, they WANT us to play and sing).

Sports have always been very important in my life (I used to be an acceptable swimmer and basketball player). I like just about every sport except sea races.

The book "El gran salto al abismo" writen by Jesus Saez and published by Next Door Publishers, is having a more than acceptable response.

It narrates my life in conjunction with the space race and exploration.

The inauguration of the last summer term of UCM was, again, hosted at Robledo.

It took two sessions using two days in a row. The speakers were superb as always.

Languages: Spanish, english and a bit of french

My moto: Carpe diem - Enjoy the here and now!